I went back out to the SHSU Observatory last night to take advantage of the clear skies and absence of moon. Instead of the EON 130mm APO, I decided to test out the SBIG Canon EF adapter on the STF-8300M and see how it worked out. I hadn’t balanced and shot with the side-by-side saddle in a long time, so there was some risk in making my already marginal tracking worse with a balance issue, but I was hoping the faster f/4 aperture of my EF 600mm f/4L IS lens would improve the amount of signal I could pack into a short night out. With AP, nothing goes exactly as you planned most of the time… and last night didn’t disappoint. The mystery fuzzy/focus/dew problem came back even though I had used the heat of the entire day to ensure I was synchronized with the ambient temperature. I tried modifying the set point cooling (again) thinking that might help, but it didn’t do much. Then, I had a eureka moment. I noticed that if I spun the FW8-8300 to the empty slot, I could image a relatively crisp starfield… but if I took sample shots on any other filter setting (R, G, B, LP, Ha, OIII, SII), I was in the fuzzies. It was the filters that were dewing out! (or so it seemed)… gah! Now what? Fortunately, Dave was there and had an extra long velcro dew strip that I wrapped around the protruding section of the FW8-8300 and cranked up on the max setting. After some time, that seemed to help. It will take another night of imaging to really test if this is “the fix” for dealing with the extreme Texas summer humidity. By the time I troubleshot and quasi-corrected the issue, it was after 11 and I’d lost a good chunk of my short night. Another silly mistake where I had not noticed a deselection of auto-save subs in TheSkyX caused me to lost about half an hour of great blue channel subs that I had to re-do. All said, I ended up staying later than I should have and didn’t get home, unpacked, showered, and in bed until 6:15. Sleep fast! 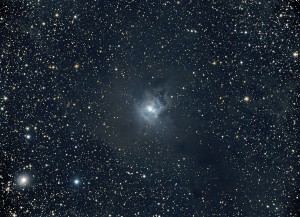 I really need some more practice. I am introducing a lot of noise in my workflow somewhere… or maybe it’s just in my data. I seem to lose star field color when I try to integrate Ha into the LaRGB. I get way desaturated combinations when combining luminance into RGB using only the Lum channel and weighting it and colors that are way over saturated if I use chrominance noise reduction in that step. I just used the LRGB tool here and skipped several steps of my old workflow because I am just not getting it. Maybe I need to sleep on it and come back with a fresh start. 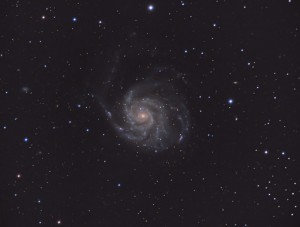 I noticed last time out (which was some time ago) that I was getting some blurry and out of focus images even after carefully adjusting focus and checking that I had no dew accumulation on the front element of my scope. I was almost done for the night, so I didn’t think too much of it, but it happened again tonight resulting in cutting the imaging session short. I didn’t get enough color data to add to this Pinwheel Galaxy, so I’ll have to go back for some more subs another night. I am guessing that the dew forming is somewhere between the rear element of the OTA and the CCD. I really am at a loss, but I’m sure some digging around on the Internet and/or forum queries will reveal the tribal knowledge I need to get past this speedbump. I tested out my first Bahtinov mask tonight – which worked great until my little dew situation. I think only about an hour of Luminance data was usable after ditching some fuzzy subs. I don’t know how to integrate less than three frames per channel in PixInsight (I think that is a limitation by design, but not sure), so I’ll have to do some more RGB on this target next night out. The learning curve on the SBIG is fun to climb, but a mentor would make things a lot smoother.