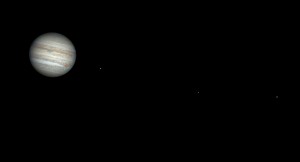 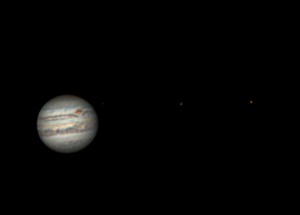 I’ve never attempted to photograph this gas giant… our largest planet. It had been so long since I tried to take a picture of a planet that I really wasn’t sure I’d remember the steps. The planet was set to transit around 10:45pm at around 37° altitude, so the seeing was challenging despite being a beautiful night. You can see (left to right) Io, Europa, and Ganymede visible in orbit… these are 3 of the more well known siblings of Jupiter’s 79 moons. Fun fact: Ganymede is the largest moon in our solar system. I’m looking forward to trying this again when Jupiter and Saturn are higher in the sky, but I’m pretty ok with this first attempt!