It is hard to believe I haven’t imaged since the first week of August and we are about to start November in a couple of days. I love the winter target selection and I probably would have selected something besides the Triangulum Galaxy if I weren’t boxed in by pine trees at my imaging location such that near-horizon targets just can’t be reached. I picked Messier 33 for last night because it was high in the sky all night and provided plenty of imaging time for a multi-channel attempt. This represents about 6.2 hours of total data… 20x180s each R, G, B… 34x180s Lum… 9x600s Ha. I tried Silvercup’s HaRGBCombination Script for PixInsight, but it kept locking up my client, so I ended up using the Vicent Peris method that Harry has in his tutorial. The post-processing is trickier already with multiple channels and trying to blend in narrowband, but I kinda made it more difficult for myself by binning the color channels 2×2. I figured out the hard way that I needed to go back and shoot dark subframes that were also binned 2×2 in order to register and calibrate the color channels. It was a beautiful night out and a great learning experience. Let’s hope the next one isn’t another 3 months out! 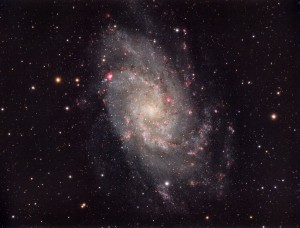 NGC 7380 (Sh2-142), more commonly called The Wizard Nebula due to it vaguely resembling Professor Albus Percival Wulfric Brian Dumbledore and his ilk, was first discovered by Caroline Herschel, sister of German-born British astronomer Sir William Herschel, in 1787. William included it in his famous catalog as H VIII.77. The Wizard is about 7,200 light years from Earth within our own Milky Way Galaxy, is one of the larger nebulae in Cepheus, and is moving toward us at 34.13 kilometers per second. The gas and dust within the cluster span about 110 light years across. This kind of nebulae are the birthplace of stars. They are formed when very diffuse molecular clouds begin to collapse under their own gravity, often due to the influence of a nearby supernova explosion. The cloud collapses and fragments, sometimes forming hundreds of new stars. The newly-formed stars ionize the surrounding gas to produce an emission nebula. In this case, the stars of NGC 7380 have emerged from its natal cloud some 5 million years or so ago, making it a relatively young cluster.

ps. William Herschel discovered infrared light in 1800. He was a stud.

The Crescent Nebula (also known as NGC 6888, Caldwell 27, Sharpless 105) is an emission nebula in the constellation Cygnus, about 5000 light-years away from Earth. It was discovered by Friedrich Wilhelm Herschel in 1792. It is formed by the fast stellar wind from the Wolf-Rayet star WR 136 (HD 192163) colliding with and energizing the slower moving wind ejected by the star when it became a red giant around 250,000 to 400,000 years ago. The result of the collision is a shell and two shock waves, one moving outward and one moving inward. The inward moving shock wave heats the stellar wind to X-ray-emitting temperatures.
The light sub-frames were acquired over the last two nights (7/6-7) and represents just under 2 hours of Hydrogen-alpha and 4 hours of Oxygen-III narrowband data. It is the first image that I have successfully created with 10 minute subs (600 sec) and also the first light on my new field flattener. I believe the reason I was able to pull off longer subframes has entirely to do with balance on the mount – autoguider and OTA parallel and centered over frame versus the dual-saddle side-by-side configuration I end up having to use when I use camera lenses. This is my first attempt at the Crescent and despite some bleary-eyed, late-night, rushed bi-color processing, I think it turned out alright. Practice helps.

The Rho Ophiuchi cloud complex is a dark nebula of gas and dust located just south of the star ρ Ophiuchi of the constellation Ophiuchus. At an estimated distance of 130-ish parsecs (about 430 light years) this nursery is one of the closest star-forming regions to our solar system. It is also one of the most colorful areas of the sky because the nebulae surrounding Rho Ophiuchi display a wide range of cloud phenomena. Rho Ophiuchi, a bright triple star, is surrounded by the blue reflection nebula, IC 4604. The blue star Sigma Scorpii is surrounded by an intense red hydrogen emission nebula. Adjacent to Sigma Scorpii is the large globular cluster M4. Despite its apparent association with the surrounding nebulae, M4 is actually a much more distant background object at about 7200 light years away. A second globular cluster hidden in the nebulosity around the red supergiant, Antares (meaning “rival of Mars”), NGC 6144, is also a background object at 33,000 light years away. Antares is so large that, if it were at the center of our solar system, its outer atmosphere would reach to the orbit of Jupiter. Antares strong stellar wind has created the relatively cool yellow nebula, IC 4606, that seems to engulf the star and obscures NGC 6144. The blue reflection nebula, IC 4605, next to IC 4606 is reflecting the blue light from the star it surrounds. Part of the the dark nebula, B44 (commonly known as “The Dark River”), is seen spilling through the complex. This nebula is created from dust that is in front of the surrounding nebula and causes us to see it in silhouette.

I ran into a lot of issues this weekend trying to get some new (to me) tech working correctly. I am trying to transition from a SynScan hand controller on my equitorial mount to an EQ direct ASCOM interface so I can slew to targets from within TSX. I have the basics working (like COM port access and EQ-MOD control of the mount), but I’m having trouble with alignment and accurate pointing. I tried feeding 15 star alignment points into the T-Point plugin, which took a couple of hours, and was unable to resolve accuracy problems. I ended up switching back to the old way to try and salvage some night sky. It was cold and I was tired, so I just imaged Messier 101 (The Pinwheel Galaxy) with no filters. The dwarf galaxy NGC 5474 is also prominent in this grayscale image as well as NGC 5477 and NGC 5457. There’s nothing like a night out imaging after a long hiatus to remind you the important role proficiency plays in consistent results.

I have a long way to go when it comes to PixelMath. Thankfully, helpful folks like David Ault (Cloudy Nights) have provided some great examples for me to reverse engineer and try to understand. Here is my second attempt at processing the original Rosette subs into something similar to a bicolor SHO palette. This was accomplished by generating a synthetic green channel with the following PixelMath:

Arg… it’s been a long time since I attempted to image, but Dave and I made it out last night for a few hours. We discussed attempting the Rosette Nebula since neither of us had ever tried to image that target before. It seemed to be up for a reasonable window and bright enough for us to get some data from the yellow-ish/green zone at Tranquility Base. Dave continues to have camera control issues from his computer and I feel bad that I can’t be of more help due to my ignorance around the Nikon platform. He ended up shooting M81 and M82 unguided using a handheld intervalometer (off-body shutter trigger with an interval timer built in) and it worked quite well. I started out shooting with a hydrogen-alpha filter because the moon was quite bright. I think we are less than a week from it being full at this point. I didn’t think I’d have enough time to get sufficient RGB subs, so I had to make the call to either hoard a bunch more Ha data the rest of the imaging window or attempt a bi-color rendition of the target. I’m pretty new to narrowband integration and haven’t done much of anything using synthetic palettes other than perhaps the North American wide-field last year, so I switched to shooting Oxygen III until the nebula was obscured by Loblolly pine tree tops. I lost a handful of subs due to clouds and another handful of subs due to silly mistakes that I blame on a quarter year hiatus… like not meridian flipping before tracking fell off a cliff. At any rate, this image represents 46 sub-frames at 300s each (28 Ha and 18 OIII). I used a previous master suber-bias and master dark that I had in the library. I don’t know if the master dark temperature compensation was the same, but whatever (FWIW, this was shot at -5C). I wanted to process this in SHO Hubble Palette, but honestly couldn’t remember how to do it, so I just went with a natural synthetic green channel using a 10/90 PixelMath blend of the Ha and OIII channels. The original Ha stack had far better signal to noise due to the greater number of subs and stronger Ha emission, so I used it for the Luminance rather than extracting Lum from the blended RGB. All of the registration, calibration, and integration was done in PI and then I just used PS CC for re-sizing for the web. This turned out to be a lot more interesting target than I anticipated and would really love to spend some time accumulating more (deeper) frames and try different processing techniques. Cheers!

I wanted to share just the Ha data because out of everything I attempted this weekend, the integration of the Ha data was my favorite result. I love the dust lanes that show up in space with the deeper exposures. I love the gradients in the emission nebula. I love the contrasts in this image and could see trying this again. I didn’t do much here other than register and stack the Ha subs, did a quick dynamic crop and ABE, convert to non-linear, and resize for the web. I think this is only about an hour of Ha. It makes me want to pull down several nights of light and print up a wall hanger!

There is a section of space in the Orion Molecular Cloud Complex called Barnard’s Loop (Sh 2-276) that contains the dark Horsehead and bright Orion nebulae. This image is more or less the “center” of the loop. The stars within the Orion Nebula (on the right) are believed to be responsible for ionizing the loop as is Alnitak aside the Flame nebula on the left. Alnilam and Mintaka are also seen in Orion’s belt on the left. All this stuff is several hundred parsecs away and some of the coolest and well known of DSOs in the night sky. I tried to do something experimental (for me) here by replacing the Red channel with Hydrogen Alpha in a standard RGB integration. That’s is at least part of why it looks so bloody (because when Hydrogen electrons fall to their lowest energy level… like in an emission nebula… they release photons at 656.28 nm… which is quite red to our seeingballs). It turned out a little more cartoony than I’d imagined. I bet it could be toned down to look a lot better, but I just went with the first pass at it because I realized I just didn’t have enough green or blue channel data to pull this off. The Ha data was a lot deeper too… 10 minute subs versus 5 for the G and B.

We had a little time between Cygnus setting and Orion rising above the tall pines around us, so I just grabbed some Andromeda while waiting.